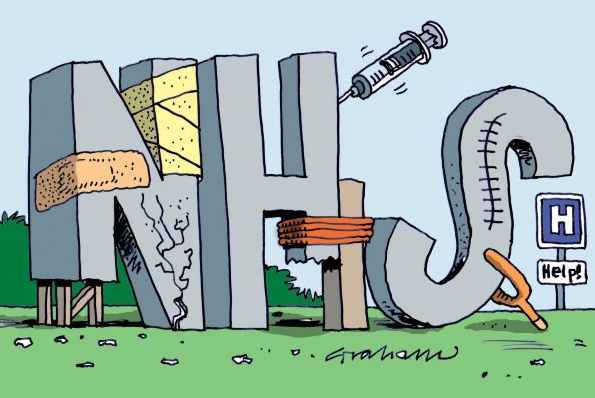 In part one of this series I described some of the threats to our NHS in its present form. While nobody can predict the future with accuracy it is worth taking a moment to consider where we are heading if nothing is done to protect the service.

You will find this hard reading. No doubt some will accuse me of scaremongering. I concede that the picture I will paint is grim but I truly believe it to be a real possibility. I will not suggest a precise timescale these events – that would really be stretching it too far – but suffice to say we are talking months to  a couple of years rather than decades.

To follow the logic of my argument you need to have read part 1 of the series.

Where are we now?

Let’s start from the current situation. Emergency departments in hospital trusts are under extreme pressure. Ambulances cannot offload at hospitals so there are not enough vehicles on the road for new emergencies. Hospital bed occupancy is near 100%. Mental health bed occupancy is over 100% with patients sitting for days in emergency departments waiting for places.  Primary care is struggling to cope with increasing demand. GP workloads have rocketed and we cannot recruit enough GPs to replace those taking early retirement.  Social care is near breaking point with limited community places and no cash for care packages.

We have already started to see a deterioration of performance against government operational and financial targets affecting all sectors of the health economy. Emergency department 4 hour waits, ambulance pick up times and cancer treatment targets have all deteriorated. Two thirds of acute  trusts are in financial difficulties and some may go bankrupt.

So what will happen next?

Senior managers will be put under enormous pressure by Monitor, NHS England and the CQC to improve both financial and operational performance AT THE SAME TIME. There will be some extra cash from a government slush fund which will be trumpeted but will be manifestly inadequate.

CEOs will find their jobs are on the line so they will respond in the only way they know. By putting more pressure on their front line staff, cutting non-essential services to the bone, cancelling elective work (while being careful to shuffle the patients around so elective targets are not compromised), freezing vacancies and putting a ban on procuring paper clips.

This will not work. Performance will deteriorate. Staff morale will fall and recruitment will suffer. General practice and front line emergency services will be the first to really struggle with recruitment. The private sector will look appealing to exhausted staff and some will jump ship.

The regulators will up the ante piling on the pressure from the centre. Ministers will screech that something must be done. A couple of high profile CEOs will be sacked, and several more will walk while they have the chance. Unsurprisingly their vacated posts will not attract any suitable candidates and other non-executive board members will “act up” on a temporary basis (which eventually will become permanent).

The twice daily local health economy teleconferences between commissioners, acute and ambulance trusts, primary care and social services will become increasingly acrimonious and ineffective as the combatants try to shift the blame away from their service. Participation will be delegated down to more junior managers until they fizzle out completely.

Eventually Monitor and the CQC will realise that trusts cannot reasonably expect to meet the targets and will back off. Watch out for this happening because THIS IS WHEN IT ALL FALLS APART. Services which have only been kept going by fear and Draconian management will take their collective feet off the gas. Burnt out staff will accept patients waiting on trolley for 12 hours as the norm. Quality and patient experience will plummet. Waiting lists will increase, routine surgery will be reduced and “non-essential” services such as infertility will be discontinued altogether.

While all this is happening private healthcare providers will tender for the profitable parts of the NHS. They will usually win these bids, partly because they have more resource to put into the preparation and partly because they can afford to offer loss leading prices. Current NHS providers of these services will disinvest in staff and equipment. Some may even be slightly grateful as it gives them an opportunity to meet cost improvement targets – but they will be deceiving themselves. 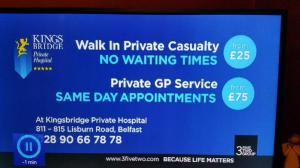 The private providers will attempt to make any money out of their new services. These will still be branded as NHS so the public will be largely unaware of what is happening. They will cut costs, downgrade staffing, avoid complex cases and stoke up demand for the profitable parts of the service. They will try to maximise profit by offering “enhanced” services for cash top ups.

If it turns out to be too hard to make money they will walk away, leaving a hole for the NHS provider to fill. But remember – the NHS provider has given up the staff and equipment for CIP and they have no cash to reinvest. Some private providers will take advantage of this and renegotiate a better contract price.

As the core NHS business shrinks, quality nose dives and waiting times rise there will be a big increase in the number of people with the spare cash taking out private health insurance. This will lead to a steady growth in the non NHS private sector (as opposed the private sector still branded as NHS). Many of the most powerful and influential of the population will become less reliant on the NHS. Pressure to keep it going will diminish – by that stage it will be pretty rubbish anyway – and it will become an organisation providing second rate health care for those without insurance. It will be staffed by a combination of skilled altruists and no-hopers who cannot make it in the private sector.

Patients who genuinely need to access healthcare will stay at home because they don’t want to impose on a pressured system – and nobody will have the energy to try to persuade them otherwise.

At the end of the day we will have a fragmented healthcare system. It will be much more expensive but we will pay for the increased costs through insurance schemes rather than tax. It will be inefficient, inequitable and socially decisive. Illness will be a financial as well as a physical catastrophy – even for the very rich.

So what do we have to do?

I warned you it would be grim. I scenario I have described may be towards the “worst case” end of the spectrum but there are other potential issues that I have not included which could make it even grimmer – a flu pandemic for instance.

Whether or not you believe all of this analysis to be correct there has to be a great deal of cause for concern. Much, if not all, is avoidable but it will take early and decisive action from a strong government to fix things.

In the final blog of this series I will describe what I think could be done to save the NHS, and you will have an opportunity to have your say too.